Thanks to a recent report from the Center for Disesase control's first annual inagural Weight of the Nation conference, there has been increase in reports in the news and in print about the ever growing obesity problem in America. Here is a NBC news report on the conference. The report says that about $147 billion is spent on treating weight related illness such as diabetes and heart diseases annually.

Closer to home, it was recently reported at the Bangor Daily News that Maine, although only the "35th most obese state in America," is the most obese in New England. From that article:

I have always had a hunch that people in urban areas and those don't drive cars
on a regular basis are generally in better health, and this associated
press article backs me up. A few highlights:

"The authors say it's more than lifestyle choices that lead Americans to use their cars more. Europe's compact, dense layout and infrastructure are more conducive to getting around without a car."

So while this analysis doens't provide a scientic linlk betwene obesity and alternative transportation, it makes some good points that are hard to argue with. Keeping people in better shape, which benefits us all, is one of many reasons to invest in public transporation and carless or less-car dependant transportation in the Portland area.

Posted by Corey Templeton at 1:57 PM No comments:

Have you heard of New York City's Summer Streets?

NYC DOT and our partners are proud to present Summer Streets. We will temporarily close Park Avenue and connecting streets from the Brooklyn Bridge to Central Park to motor vehicles and open it up to people on three consecutive Saturdays in August (August 8, 15, & 22).

I first learned about this interesting event through streetfilms.org, check out a video about the Summer Streets here. Streetfilms is part of the excellent streetsblog network (which this blog is proudly part of).
Could Portland, Maine do something like this? There are currently a couple of events that close down roads here, including the Old Port Fest, which removes cars from most of the Old Port streets, and the Sidewalk Arts Festival, which makes Congress Street a pedestrian only area from Congress Square to Monument Square.
A key aspect to both NYC's Summer Streets and the two events in Portland mentioned above is that not only are the streets car-free, there is also 'stuff to do' besides walking down the middle of the road or not having to look both ways before crossing the street.
I think that Portland could handle a Summer Streets type event several times during the year on Exchange Street, which is a great example of a truly urban street that fits in perfectly with the character of the city. Of course, emergency vehicles and delivery trucks would be let through, but the overall harm of not allowing cars down Exchange Street for every Saturday in August would be minimal and it would be a benefit for the heavy pedestrian traffic in the area. It could even help open up a few people's minds about what new developments (think the Ocean Gateway area and Bayside districts) could be instead of big parking lots and buildings zoned for single uses.
Anyone else want to help me put up some barricades at the top of Exchange Street next Saturday? :-P
Posted by Corey Templeton at 4:27 PM No comments:

"Walking isn't a lost art: one must, by some means, get to the garage."
- Evan Esar
Since this is a blog about the car-free "lifestyle," I will share a tidbit from my life.
Yesterday on the Maine Turnpike, just south of Portland, there was an accident which stalled traffic for hours. This morning, many people at work shared their 'horror stories" about how long it took to get home. One of the biggest complaints that I have about our local mass-transit options (the only option for me is the METRO bus) is that it usually takes much longer to get anywhere when compared to traveling in your own car. Although a bus is equally as susceptible to being delayed or being involved in a motor vehicle accident, I made it home in almost record time last night.
Posted by Corey Templeton at 6:11 PM No comments:

Email ThisBlogThis!Share to TwitterShare to FacebookShare to Pinterest
Labels: story

Here's a run-down of some bicycle related links:
Posted by Corey Templeton at 3:03 PM No comments:

Email ThisBlogThis!Share to TwitterShare to FacebookShare to Pinterest
Labels: bicycling

Welcome to the second installment "Fix This." I don't want this blog to have a negative tone so I consider this series to be more of a call to action than a complaint. That being said, pardon my complaints about this bus stop.

Let's start with some photographs:

Note the sign: "No drinking in shelter, violators will be arrested." 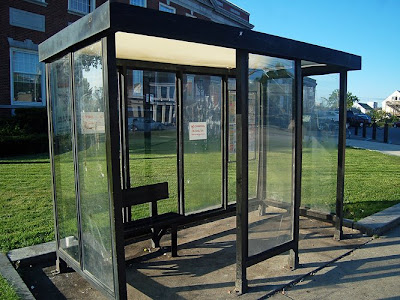 .Looking down Park Avenue (reminds you of New York, no?) and the Parkside Neighborhood. 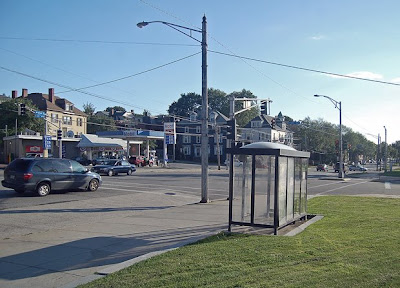 This shelter resembles most of the bus shelters around the city. Some are newer, but have nearly identical floor plans and overall aesthetic appeal.

A few issues that jump out at me:

Lack of seating - The bench in the shelter is large enough to fit one person comfortably, or two strangers awkwardly. Not to mention, there is often someone passed out on this bench.


Overall Size - This stop is always busy when I go by it in the morning (I apologize for taking pictures of it when no one was around). A larger shelter would be good for keeping more people dry and might make the area a bit more attractive. This stop serves three bus lines according to this map from the Metro website, and would make a great 'hub': 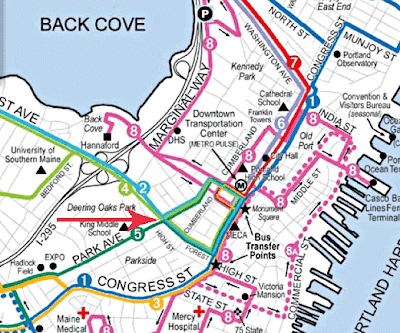 Aesthetic value: This stop is on a corner in a neighborhood that could use a fresh coat of paint. Why not start with a new shelter? This is a lower-income area and it sounds silly to represent neighborhood pride with a bus stop, but it would be a start. It's right next to Deering Oaks Park and a shiny new shelter could invite people to the area and serve as an information gatheringg resource with local maps, guides, advertising, etc.


Signage: The stops could use much larger and better signage of the metro routes. The current Metro schedule isn't overly complex compared to most cities, but the small maps that are on the back of this shelter could use some enlarging and clearer language.


Revenue: This isn't a walkability issue, but why aren't there any advertisements on our bus stops? I know Maine doesn't allow billboard advertising (I still have mixed feeling on this) but I don't see any harm in having a McDonald's ad on the side of a bus stop. It would bring in a little bit of much desired revenue for the system. I've even heard of larger cities which sell advertising rights on bus stops to private corporations and in return the company is responsible for the upkeep of the structure.


Here's an example of a pretty nice bus shelter, on Congress Street. This photo was taken from the side so it doesn't fully do it justice. 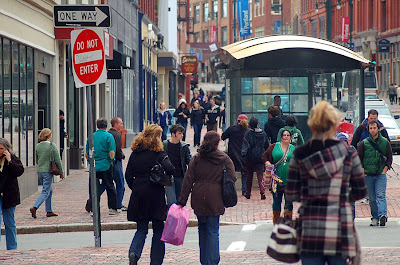 I think this shelter even features a heating component during the colder months. While it doesn't take care of several of my points I've mentioned, it does have plenty of seating and is large enough to serve the amount of people that use it. It also is unique and that counts for something. I don't want a clone made of this one, but it shows that Portland can have a proper bus stop away from the Pulse on Elm Street (the main hub).

And to finish with the Post Office bus stop... please fix it!
Posted by Corey Templeton at 6:18 AM No comments:

Email ThisBlogThis!Share to TwitterShare to FacebookShare to Pinterest
Labels: Fix This, The Bus

This isn't a photo blog, but I wanted to share this picture from earlier today. Today is/was "First Friday" and it was a beautiful sunny day which helped bring a lot of people downtown. I wish Portland's sidewalks always looked this alive: 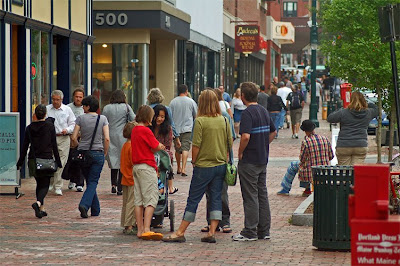 Posted by Corey Templeton at 9:35 PM No comments:

A few months ago the city manager's office set up a new "eContact" page on the city website. I have used it a couple of times and am glad to report that people do monitor the system and provide quick response times.
Their description of the system:

"Make a request or comment to the City of Portland. We want to hear from you! If you have a request, suggestion, question, or a comment, you can contact us any time that is convenient for you via this form. If you have a public safety emergency, please call 9-1-1."

There are many uses for the system, and several uses that relate to this site. A few basic examples:
Just the other day, I had a 'suggestion' that Portland should have 'way-finding maps/signs' around the downtown area to aid both tourists and locals. (Something like this or this) I also mentioned that if a lot of thought was put into their designs, they could become (very) minor attractions themselves. I got a quick and positive response:

"Thank you for your suggestion! We are excited to tell you that way-finding signs are just around the corner for Portland. We have been planning this for quite some time and signs should begin to be put up this month!"

Do you have some suggestions for the city? If it's a really good idea that is related to this site, please share it with me and maybe we could organize a 'letter-writing campaign' of sorts.
Posted by Corey Templeton at 6:34 AM No comments: