Some time ago I started writing a post about the park/public plaza in Congress Square. It is at the intersection of Congress and High Streets, right next to the Eastland hotel. Here's a map:

View Larger Map
Not long after I began writing a post about some ideas for improving the park, which is somewhat under-utilized for it's prime location, a notice was posted on the city website about the creation of the Congress Square Redesign Study Group. The group's aim is to "...advise and guide the design and engineering process for the assessment of the best use and design of Congress Square Park." The group has only met once, back in May, and doesn't appear to have any future meetings scheduled. I was not able to attend the group's inaugural meeting due to time constraints. I don't see any minutes of exactly what was discussed at the meeting, but there is a link to a presentation on the group's website that has some really interesting photographs showing the history of the square. Long story short, the square was  home to various residential and commercial buildings until the 1980's when the current plaza design was installed (along with very positive improvements to the rest of Congress Square). Since it's creation, however, it seems that the plaza has struggled to create a real identity and usefulness and is often a place where homeless individuals congregate to ask for change. Every now and then a special event utilizes the space (such as the Tower of Song festival or the Sidewalk Art Festival, but the park is usually inactive.
So since there is a group already looking at ways to improve the park I decided not to dedicate a whole post to my thoughts on the matter, until I was passing by the other day and noticed that the concrete planting pots along Congress Street had been recently retrofitted with people-deterrents. As you can see in this photo, it appears that it would be uncomfortable to sit on these, but it is still possible: 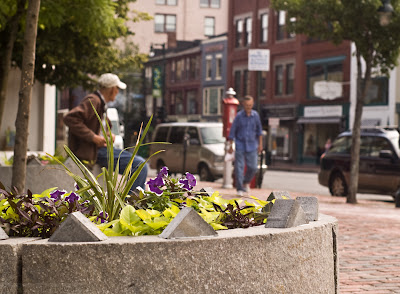 There is a sunken plaza to the left of this photo with some steps suitable for sitting on and two or three (at the most) old benches in the middle of the park but I would think that if we are not allowing people to sit on these planters then perhaps a few more benches could be added in this area. As I said, I didn't get the chance to attend the redesign group's meeting and am not able to tell you what improvements they thought of, but I do hope that there are some more useful improvements planned other than attempting to keep people from sitting down for a bit.

As recently reported at TheCityFix.com, a site about sustainable urban mobility, the Sydney, Australia city council recently denied an urban supermarket the ability to provide it's customers with shopping carts (or as they call them: trolleys).
From this article from down under, the city council "...approved a development application last September for a small local supermarket with no trolleys, but six months later the developer wanted to change it to include trolleys." The city council denied this request and the market will remain trolley-free. Apparently part of what the city council was aiming for when they approved this urban supermarket was to provide a place to shop for city dwellers without increasing the amount of automobile traffic in the already congested area. Similar to how markets used to work in cities before cars, I believe the idea was that people would make a quick stop by the local market on foot a few times a week to pick up the goods they needed for just the next few days. Here's a quote from article:

"Labor councillor Dr Meredith Burgmann says the decision was based on maintaining traffic levels in the area.

She says she has never received so many emails and letters from residents concerned about the impact of trolleys.

"It does have to remain a local drop-in-as-you're-walking-along-the-street supermarket," she said."

The Sydney Morning Herald also reported on this, prior to the city council's decision upholding the trolley ban:

"The Friends of Erskineville [the village where the supermarket is] warns that trolleys are a gateway conveyance that will hook shoppers on the car habit. ''Without wanting to sound like the League of Gentlemen, no trolleys restricts the amount of people who will drive so it's only local people, on foot, not people driving to the site,'' the group's spokesman, Brett Mason, said."

These Friends of Erskineville seem to be a pretty dedicated bunch of individuals, interested in promoting livability and sustainability in their own neighborhood. The stance against shopping carts is rather interesting and I'm not sure if this issue has ever been discussed in America. I'm not advocating that shopping carts be banned or the use of them curtailed, but it's worthwhile to think about the connection between our current infrastructure and our lifestyle. Banning shopping carts at the IGA in Erskineville is a small act, but it is a solution that make sense and seems to be popular with the people it affects on a daily basis.
Posted by Corey Templeton at 9:24 PM 1 comment: