Portland to Boston for $1

A tip of my hat to Broke207, where today I learned that Megabus is now offering special $1 fares for one-way travel between Portland an Boston.

Megabus is a pretty well-known operator of low-cost intercity buses in the US and UK. Concord Coach Lines, which connects Portland's Transportation Center with Boston's South Station is Megabus's partner in this low-cost venture. The $1 deals are limited to a couple of seats on each trip and require booking in advance. Megabus and competitors such as BoltBus have similar deals between other cities with special reduced fares. So the next time you are heading out of Portland via public transportation, don't forget to check out the Megabus offer. I enjoy the legroom of the Amtrak Downeaster compared to the bus, but snagging a $1 ticket is a good trade-off. 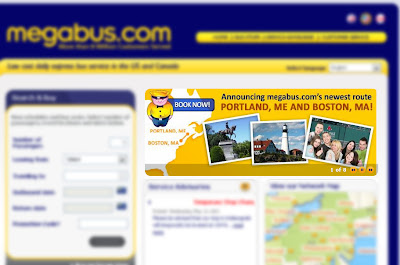 Posted by Corey Templeton at 5:47 PM No comments:

Email ThisBlogThis!Share to TwitterShare to FacebookShare to Pinterest
Labels: Boston, Money, The Bus

As part of the big development proposal at Thompson's Point,which will be known as "The Forefront at Thompson's Point," the city may be getting some additional tax revenue for public transit. Per this Press Herald article from today's paper, the city council "decided to set aside 25 percent of the money the city will receive [in taxes from the development once completed], to be used for transit projects."

City councilor, public transit advocate, and mayoral candidate David Marshall, profiled on this blog in 2009, pointed out while talking with the Press Herald that the money from this development "...would be enough to pay for an express bus from the Portland International Jetport to the Portland Transportation Center – next to the proposed Thompon’s Point development – and then on to the Maine State Pier." Here's a quick Google maps map of the route from these three public transit hubs: I'm not sure of this bus route would by managed by the Metro or not, but I think this would be a good route that would kind of combine two existing Metro routes, the #5 (The Maine Mall bus) and the #8 (the peninsula route).

The #5 currently goes from the Metro Pulse on Elm Street and out to the mall, but also services the Jetport and Portland Transportation Center. Speaking as a weekday rider of the #5, I see a decent amount of people going directly between the jetport and the transportation center. Perhaps this new route would allow the #5 to skip over those two stops and make more frequent and less-congested trips between downtown and the mall area.

The #8 is the peninsula route bus, which stops at the Casco Bay Ferry Terminal while meandering around the rest of the peninsula. One suggestion I would make, without in-depth research on the issue, is for this newly envisioned express bus bus is to also swing by Monument Square and the Metro Pulse in order to fully connect with the rest of the bus system. Either way, the fact that public transportation continues to be on the radar of our city council is a good thing.

Posted by Corey Templeton at 8:24 AM No comments:

Paint Your Own Crosswalk

This is a crosswalk across Elm Street, at Monument Square: 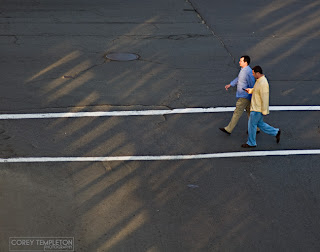 And with a bucket of high-visibility-glow-in-the-dark-annoyingly-bright yellow paint: 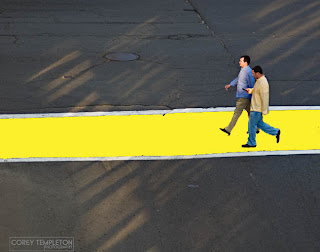 Of course, I wouldn't actually paint my own crosswalk. This random story from 2008 I came across details someone in Indiana who was jailed for taking matters into his own hands after the city decided not to paint a crosswalk.
Posted by Corey Templeton at 6:13 PM No comments:

Email ThisBlogThis!Share to TwitterShare to FacebookShare to Pinterest
Labels: Crosswalks

It's nice to see the freshly painted crosswalks around downtown. If you have been outside this last week then you have probably noticed them too. I think they help alert drivers of pedestrian crossing areas better than signage alone. 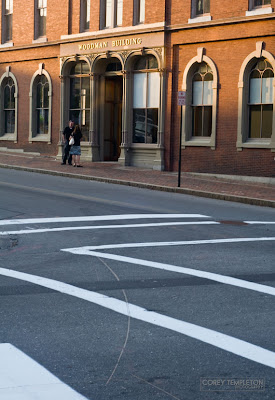 There remains some places around the peninsula that are oddly lacking crosswalks. For example, the intersection of Free and Center Streets, which is at a pretty central pedestrian location directly between Monument Square and the Civic Center: 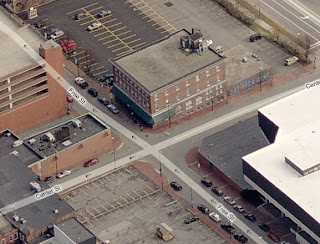 Posted by Corey Templeton at 1:51 PM No comments: