Two Google maps posts in a row? Not surprising when you consider that I enjoy looking at and analyzing maps.

Anyhow, not sure if these have always been here (maybe I've just been missing it at all these years), but I found that the Metro and South Portland bus stops and schedules have been integrated into my Google maps. I think these have been an option for Google Earth but I never noticed the integration on regular web maps until recently. They seem to be accurately placed and also link to a current time table of upcoming buses. 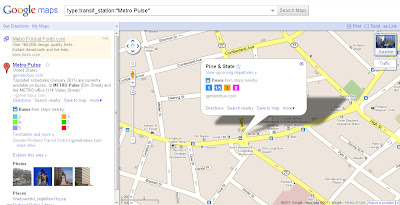 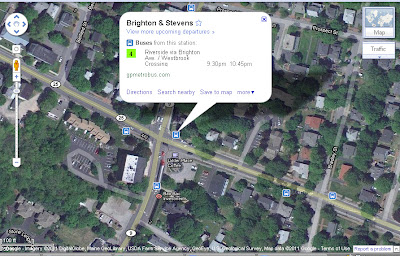 This isn't quite as helpful as I imagine open transit data would be, which would allow developers to build applications which track the real time location of Portland's buses, but it's a good step in that direction.
Posted by Corey Templeton at 8:53 PM No comments:

Email ThisBlogThis!Share to TwitterShare to FacebookShare to Pinterest
Labels: The Bus

I recently happened to stumble upon this page on the city website that links to a map with downtown bike rack locations: 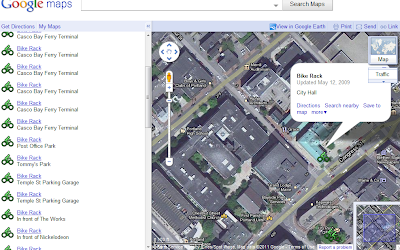 ﻿
It looks like this map was made in 2009 so it doesn't include newer bike racks (I have a feeling that many more have been built over the last two years) and it only includes the immediate downtown area, but I still find it interesting. If I had a bicycle (I'm thinking about getting a new one) and was looking for somewhere secure to lock it up while I was out and about then I might be inclined to open up this map on my phone and find out where to go.
Posted by Corey Templeton at 12:56 PM No comments:

Starting this month, local bus riders such as myself can take advantage of the new $45/month regional bus pass. This allows for seamless transfers between Metro and South Portland buses. Here's a poster announcing the new pass:

I think this is a great move. I personally use my part-time student status at the University of Southern Maine to obtain a great discount for Metro fares, but this regional bus pass is something that could definitely attract some new riders. You can no longer purchase the $40 a month Metro-only pass, but the price increase of $5 doesn't seem to be too hard to handle overall. I imagine that perhaps someday in the future we could see further integration between local transit providers. In order to better serve the greater Portland population, it makes sense to integrate our transit services as much as possible and to perhaps have a unified transit organization someday.
Posted by Corey Templeton at 7:48 PM No comments: