The Pedestrian Flow (or lack of)

I came across this post on the World Streets blog today, and here is the text I want to breifly discuss:

"One of my great interests is time reallocation in an urban system. All I mean by this is that when I walk across parts of London which I do most weeks it is quite clear that the amount of time I stand still and do not move as traffic hurtles past is very large. I estimate it is about 50% of my journey time. That means that even in a congestion charge best practice world my time is being stolen to reward drivers with time savings. I want the theft halted and the system re-prioritised to reward pedestrians and cyclists."

I find this to ring very true in not only here in Portland, but in every city that has automobile traffic that I've visited or heard of. At a 'standard' street intersection, a pedestrian is likely to wait an disproportionate amount of time to move in relation to the movement of vehicular traffic.
Before I get a ton of hate mail, I don't think that 'the equation' should be reversed to make it as difficult for cars as it currently is for pedestrians, but I think there is room for improvement in the daily flow of intersections.
The first intersection that comes to mind for improvement is one near my apartment, the intersection of Congress, High, and Free Streets (commonly referred to as Congress Square). High and Free Streets, both being one-way, tend to have an almost endless stream of traffic during busy times. A finer balance of 'walk' times and red lights would make this a more friendly area for pedestrians. There was an article awhile ago in the newspaper about the great art and entertainment scene that has been blossoming for the last several years on Congress Street, west of High Street. One of the owners of an art gallery in the State Theater building said something to the effect of "it's hard to attract the kind of foot traffic on this side of town that the Old Port and the rest of Congress Street attracts, it's like there's an invisible wall." Although they did not seem to make the connection, it is clear that this intersection is an obstruction to pedestrian movement on Congress Street and a few simple redesigns could make a positive difference.
I can not find it anywhere, but I'm pretty sure I saw an idea on Rights of Way a long time ago, in which there few pictures of a slightly redesigned intersection here that eliminated the merge lane from High Street onto Free Street. Simply turning that into a sidewalk and forcing cars going from High to Free Street to do so at the intersection created a great little space and made the intersection much more manageable. Inspiration for such a design can be found in the reclamation of space for pedestrians in New York's Times Square.
By allowing pedestrians some breathing room to cross streets, it would encourage car-free travels and also make city driving more efficient for drivers who currently become enraged the second that a light turns green and a pedestrian has a few feet left to go to to the nearest sidewalk. One thing I never understood about the pedestrian signals at intersections is that they don't have the standard green, yellow, and red signals that vehicles have. There are countless intersections around town that give the steady red stop/don't walk signal to pedestrians when there is clearly enough time to cross the road. At the risk of being arrested for jaywalking (does that happen in Portland? Also, it's sad that most streets are purely designed for the fastest-possible movement of cars even in dense pedestrian environments) I prefer to cross the road before the oncoming traffic's signal turns green in order to avoid waiting in the cold for 5 minutes while people in heated machines cruise by.
I could go on, but I will stop here before I start rambling too much!
Posted by Corey Templeton at 3:05 PM No comments: 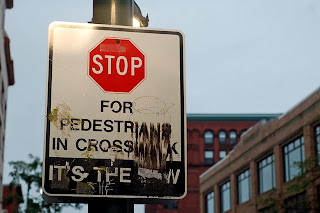 Is Portland a safe place to walk, bike, run, etc?

For the most part (I'm looking at you, Franklin Arterial!) the peninsula is home to pretty calm streets that enable and encourage pedestrian usage year-round.

At the Maine Personal Injury Law Blog (run by local firm Joe Bornstein) they recently had a post about an update to pedestrian safety law.

Pedestrians, by law, now have more room to run and walk when on the road. A new law protecting pedestrian safety states that drivers must leave at least three feet of clearance between their vehicle and a pedestrian when passing. The decree is a continuation of a similar law for passing bicyclists.

The new law went into effect on September 12th and is being considered by many as an awareness act. Known as “An Act To Improve the Health of Maine Citizens and Safety of Pedestrians," drivers must now be more cautious of their actions around pedestrians or they will be fined.

I applaud the effort, and although we all know that traffic calming and common sense are more effective tools to enhance pedestrian safety in Maine, the law certainly means well. Fortunately, most roads in downtown Portland have adequate sidewalks, and this law seems to be more focused on pedestrians utilizing roads without sidewalks.

And back to the issue of safety in Portland, I rarely hear of fatal incidents involving pedestrian/bicycles. Most of the areas that pedestrians have access to in downtown Portland are low(er) speed areas, compared to the high-speed roads that connect the suburbs and rural areas that are purely designed for automobile use. In turn you rarely have incidents on the higher speed roads outside of cities and town centers because they are rarely used by pedestrians since nothing is within reasonable walking distance.

In a broader sense, the streets of Portland are relatively safe as far as crime goes. Despite the occasional crime spree, most people would report experiencing few serious problems. Perhaps more on this topic in the future...
Posted by Corey Templeton at 3:08 PM No comments: