The METRO is looking at some changes to the Route 1 service, according this rider survey I came across. Nothing too drastic is planned, but they would like some feedback from riders. If you are interested in completing the survey, you can email it to dbeck@gpmetrobus.com. Route #1- South Side MunJoy Hill Survey-9.6.11 REV.
Posted by Corey Templeton at 7:25 PM No comments:

Email ThisBlogThis!Share to TwitterShare to FacebookShare to Pinterest
Labels: The Bus

The Portland Society of Architects will be hosting a (members-only) event on September 20th concerning Spring Street. Check out this page for details. They summarize the situation by saying:


The city planners of the early 1970′s, fueled with Federal money, demolished the core of Portland in an attempt to build a suburban mall downtown. Now we are left with jersey barriers between High and Exchange St and a senseless highway that, except a few skateboarders, is only used by automobiles. 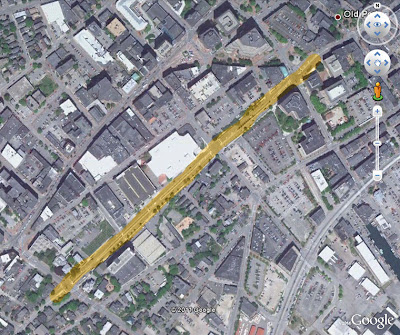 This slightly unpleasant stretch of street was once similar to how it still is further in the West End. This highway-like section was built around the same time as Franklin Arterial and coincided with the construction of the Civic Center and Holiday Inn but also the destruction of several buildings and smaller streets. Although this stretch of road is not as offensive of Franklin Street post-urban renewal, I applaud the Portland Society of Architects for getting the conversation started on how to improve this area. Although it is   early in the process, I look forward to hearing the ideas that they come up with. Read more about this topic in this recent Daily Sun article.

Posted by Corey Templeton at 12:13 PM No comments: 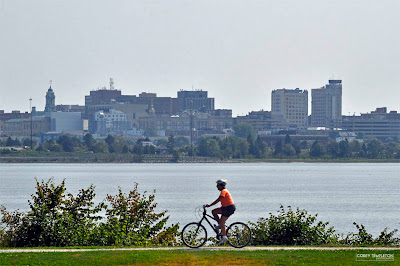 Posted by Corey Templeton at 12:51 PM No comments: