Folks, this is the perfect time of year as far as I am concerned.

If you are a reader of this blog, and you must be since you are reading this, I'm sure you also enjoy this time of year. Fall in Maine is colder than winter in some states but I have found that it is just right for my tastes. Don't get me wrong; I enjoy summer, winter, and spring a lot. But as far as good walking weather, fall is my pick.
Maybe I am extra excited since I just walked home from work for the first time in a while and the weather was gorgeous. The summer is too hot for me to make the ~4 mile trek without help from the bus along the way and the winter is a whole different story. Anyhow, it was a very nice fall day in Maine and I even saw a few bits of foliage.
I haven't been posting a lot lately, but I also except that a lot of people haven't been huddled in front of their computers to read local blogs lately. If you haven't, I advise you to step away from your desk or couch as soon as possible and enjoy the weather before it goes away.
Also..
Tomorrow night, September 29th, there is a Maine State Rail Plan meeting at the USM Portland library from 6-8pm. See you there, perhaps.

Posted by Corey Templeton at 6:06 PM No comments: 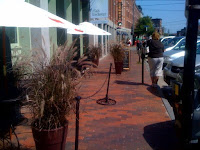 Reader Mark S. recently brought to my attention a sidewalk issue playing out in the Old Port. He sent in the picture to the left of the sidewalk in front of the Salt Exchange restaurant, at 245 Commercial Street. As you can see, sidewalk seating has taken up more than half of the sidewalk, and left a couple of feet for people to pass through and dodge parking meters. In addition to creating a challenging environment for pedestrians, it is likely also against some sort of city regulation.

The seating will likely be gone soon, as the weather gets colder, but it was still set up this past weekend and I agreed that it was not a very good use of the sidewalk. This blog is not a place to complain about things or to be a whistle blower, but a place to bring these sorts of things to people attention, at which point people can form their own opinions and act accordingly. That being said, if I anyone can find any ordinances relating to this type of sidewalk use on the city website I would be impressed! (here is the city code site) 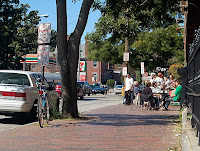 Does sidewalk seating work in some areas? Certainly. The picture to the left is from in front of Local 188 on Congress Street. This isn't a super-busy little stretch of sidewalk, though it's certainly not a dead zone, but the restaurant leaves enough unobstructed sidewalk to not cause any hassles for pedestrians. The restaurants in Monument Square with outside seating have plenty of room to spread out, also. The Empire Dine & Dance, on a pretty busy stretch of Congress Street at the corner with Forest Avenue has sidewalk seating installed, and it usually works fine except for really busy pedestrian times, such as first Fridays.

The title of this post, Sidewalk Seating, opens me up to exploring the topic of public seating on our sidewalks and in our parks. I'm all for places to sit and the only downside to the outside restaurant seating around town is you have to pay for a meal to sit there!
Posted by Corey Templeton at 6:45 AM No comments:

Out of Town: Pittsburgh

For the first edition of this new series, aptly called "Out of Town," I have chosen to shine a light upon the city of Pittsburgh. Located in the fine state of Pennsylvania at the confluence of some hard to pronounce rivers and the start of the Ohio River, Pittsburgh makes my list of most scenic cities in the country. I have never been there, but have always enjoyed pictures of the area and reading about the city's progress.

The city has a strong 'green' reputation, which is no small feat considering it rose to prominence as an industrial hub (notably steel) full of polluted rivers and smog. It is hosting a G-20 economic summit later this month which will put the city on the world stage for a few days. This website, aptly called Pittsburgh Green Story, chronicles the "...remarkable story of one of America’s oldest industrial cities. Pittsburgh, once declared "hell with the lid taken off," has undergone one of the most dramatic environmental transformations in American history and is now one of the greenest cities in the nation."

In addition to the overall green vibe, the city appears to have a pretty dense downtown and surrounding pre-war suburbs which make it a good place to explore without a car. There are not a lot of large American cities where you can literally start a hiking expedition from downtown.

That leads me to a selection of blogs and/or websites that have similar aspirations and mindsets to mine. (which is the basis of the 'out of town' series by the way)

"Urban Hike is an informal, monthly-or-so walking tour of the Pittsburgh area. We learn a little history, take in some strange and beautiful sights, get some exercise, and wrap it all up with some delectable local cuisine."

The other day I was thinking that I would like to take up hiking, but to get to some mountainous terrain near Portland without a car proved to be a challenge. By the time I walk/bike/run to a mountain I would be to tired to do any hiking. Pittsburgh's urban hike group looks like some good wholesome fun and their website is very well done.

This is another great looking site. In addition to car-free Fridays and Bikefest, they seem to do a ton of advocacy on local biking issues, have a busy community calendar, and feature some very slick looking bicycle maps. Pittsburgh is a hilly city, and I am sure that riding your bike there is not only convenient but a great workout.

"Bike Pittsburgh is committed to making Pittsburgh increasingly safe, accessible, and friendly to bicycle transportation. The work we do is at the heart of urban environmentalism - raising awareness about oil dependency, pollution, congestion, safe streets, good urban design, and public health. We are partnering with local stakeholders to improve our streets, bridges, and trails in order to make riding to work, shopping, and exercising by bicycle safe and fun for everyone in Pittsburgh. "

And last but not least, this blog provides some good insights into current transportation issues relating to the city. An interesting tidbit I learned about the author is that they currently commute via car to their job but look forward to the day that they would be able to have a viable public transportation option for their workplace or to live and work in a more mass-transit friendly environment. A snippet from the aforementioned post:

"My goal is to at some point take a job in Pittsburgh that is more commuter friendly. For now I am stuck. Even if I wanted to move to a location closer to work, where I could take public transportation, I would have to get in my car anyway to run errands because the area is so rural.What's my point? Plan development intelligently. The office park I work in was created for people to drive to individually, access to public transit was not even an afterthought, it was NEVER considered. Now we're paying. From a completely practical perspective, gas won't be cheap forever (thank god my car is fuel efficient). At some point $50.00 a tank for a small car will become the norm again. This is not to mention the other effects (the least of which not being my sanity)."

So there you have it, some interesting stuff out of Pittsburgh. I very much hope to visit someday. What town should be next?
Posted by Corey Templeton at 5:06 PM No comments: