Welcome to the first part of a series known as "Fix This." The aim of the series is to bring up some issues that are important to those who 'walk around Portland,' and are interested in the overall health of our city. I will try to do more than simply complain and maybe a few readers will agree with me and people 'in the know' will take note.
As a preface, please check out this post on the Exit 6 interchange here, on the Rights of Way blog. I don't in anyway intend to rip-off or lure readers from Christian's fine blog, which is an inspiration. Walk Around Portland will hopefully someday attract the same clientele but obviously will not be a copy-cat blog. Also, this particular post isn't about redesigning the entire interchange, as much as it is about certain aspects affecting non-vehicular traffic that should be addressed without incurring a major redesign of the area.
Ok, here it goes.
As you may know, the Exit 6 Interchange is the 6th exit off of I-295, which runs through the city of Portland. This interstate through Portland is a much bigger 'fix it,' which may be tackled at a later time. Here is a google map view of the Exit 6 interchange, which interchanges with Forest Avenue (Route 302): 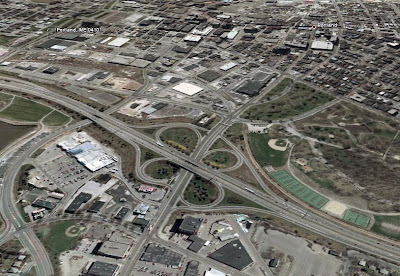 From a pedestrian, ballsiest, jogger, or lost tourist looking for the Old Port perspective (any perspective besides an automobile driver) this interchange clearly disconnects travel from the Portland Peninsula and the rest of the city to the North and West. A few major destinations on the 'wrong side' of the interchange from downtown Portland include the University of Southern Maine campus and the Hannaford grocery store and plaza.
Here are some street level views from the interchange. Note that these were taken on a pretty quiet Saturday morning, so there aren't a lot of cars or pedestrians. This first photo is looking 'away' from town: 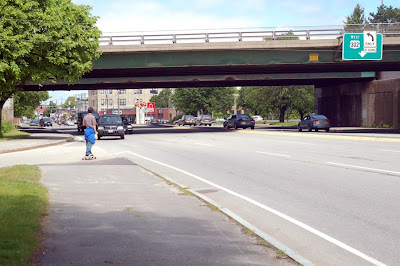 And this is from underneath the overpass looking in the opposite direction: 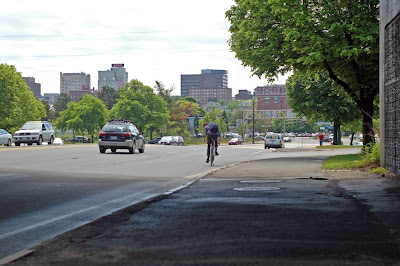 One important thing to note: There are no 'yield to pedestrian' signs anywhere here. That will not solve these problems, but it is a cheap way to at least make some motorists aware that people exist and they need to cross the entrances and exits to the highway.
There are 4 ramps for vehicles getting on and off of I-295 on either side of the road. Two of those ramps have cars coming at you, and two of them have cars basically coming from behind you or to your direct right. I didn't see any speed limit signs through this section, but would assume it would be no greater than 35mph since it is in a dense section of town. Obviously, very few people obey speed limits so I would put the average speed through this area at closer to 40 or 45 miles per hour (roughly 65 kph for the metric system folk).
When you combine that with how few people use blinkers, the area is a dangerous one for anyone not riding in a car. Even the way the lanes are set up give you no indication of whether a car may be turning onto the on ramp or continuing straight. Often a car will simply 'bang a right' just as the on-ramp starts. Cars exciting the highway are easier to deal with, but similarly dangerous in that this is a busy interchange and motorists pay more attention to trying to merge than whether or not a pedestrian is trying to cross.
I have seen a few instances where a car, usually driven by a nice old lady, will come to a complete stop before turning onto an on-ramp to let a pedestrian across. Each time I have seen that, I have witnessed a near rear-end collision and several honks coming from the disgruntled vehicles behind this kind motorist. I don't believe that cars are inherently angry at pedestrians, but when traffic is not calmed in any way it is very pedestrian unfriendly. This interchange, at ground level, is for cars foremost and the sidewalks were clearly an afterthought.
Here we approach the intersection with Bedford Street on the left and Baxter Boulevard on the right, with the USM library on the left. Many students in particular pass through this interchange in order to get from the peninsula to their classes and back. 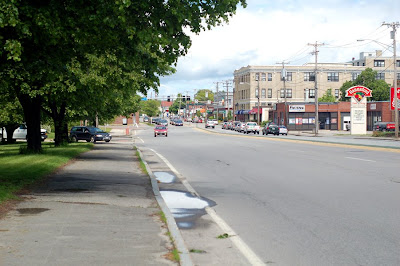 Here is an view from the USM library, showing part of the interchange: 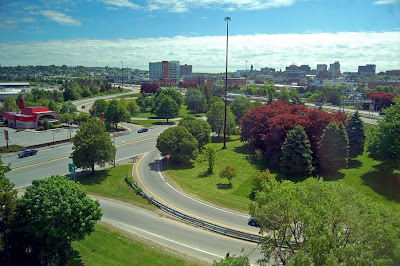 The area around the interchange could take a few lessons from some surround areas. The intersection in the photo below, where Forest Ave, Bedford St, and Baxter Blvd intersect, was recently redone on the Bedford side to eliminate a turn-only lane with a yield sign, which makes it much easier to cross.. 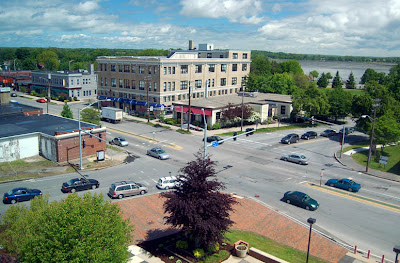 Also, Bedford Street itself was redone beautifully over the last year, complete with bike lanes, plantings and trees, sidewalks off of the street, and a friendly pedestrian crossing area for USM students. And just a block East of Exit 6, the interstate travels over the Preble St. extension which connects Marginal Way and downtown to Baxter Boulevard. Fortunately for pedestrians, there are no ramps on or off the highway here. It was redone last year also, with improvements under the bridge (lighting makes a huge difference) and a friendly pedestrian crossing zone with flashing yellow lights that are only activated when a button is pressed. (One note about this picture, the bicyclists here get an 'F' grade for riding on the sidewalk, especially when there is a bike lane here). 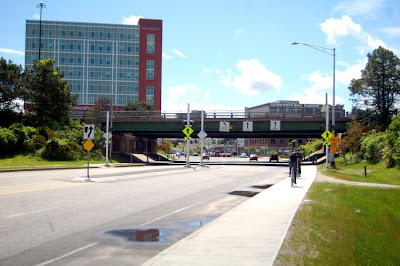 So, to recap this long and rambling post:
1. The exit 6 interchange needs to be safer and more efficient for non-vehicular traffic to pass through. It is a major thoroughfare for pedestrians as well as vehicles and it should be safe for everyone.
2. At the least, signs should be installed to remind drivers exiting and entering the highway that they need to yield to pedestrian traffic.
3. Lighting should be installed under the overpass to increase safety (or at least the feeling of safety) and the visibility of pedestrians at night.
That's all for now, thanks for reading!
Posted by Corey Templeton at 4:25 PM

Email ThisBlogThis!Share to TwitterShare to FacebookShare to Pinterest
Labels: Fix This