As you can see from the post below (click to enlarge it), there will a block party on the cove next Sunday, August 8th. It is being put on by the Back Cove Neighborhood Association and the City if Portland. 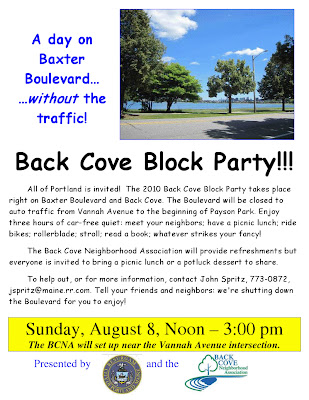 Part of the event includes closing Baxter Boulevard to automobile traffic from Vannah Avenue to Payson Park, roughly the route highlighted in the map below (PS - Google Earth recently updated the satellite images  for Portland, the images are now about 2 months old and look great!): 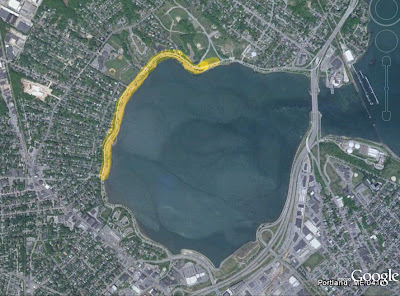 This will provide about a mile of car-free street for pedestrians, cyclists, and lots of other uses for a few hours. I like to think of this as a mini-Summer Streets event. Summer Streets in New York takes place a few  times a year in which Park Avenue and the connecting  streets are closed to motor vehicles from the Brooklyn  Bridge to Central Park. There are a few other cities that have similar events, and I am glad that Portland is allowing this to be tried here. Although Baxter Boulevard is usually a pretty calm street and has great pedestrian infrastructure lining it and suitable  bike lanes, allowing people  to venture into the street every now  and then can allow people to see the street in a different way and ponder the thought  that we don't have to build streets just for cars.
Posted by Corey Templeton at 10:30 AM